20 ferrets and their humans came out to the members only Ferret Christmas Party. Our Christmas party has always been a very low key affair. There are no organized games. This is an opportunity to visit with other members, share your silly ferret stories and be with like minded crazy ferret people. All the ferrets get a chance to meet other ferrets on neutral ground and territorial disputes are confined to “get out of my pet carrier”!

Every year Andy willingly (that’s what we tell ourselves) dresses up as Santa. Members are welcome to take pictures of their ferret(s) with Santa. This is free!  Every year several ferrets want to see what’s under that long hair and beard.  Really, Andy is a very good sport because some ferrets seem to have a personal grudge against Santa. Maybe they didn’t get that extra large bottle of Ferretone for Christmas last year! 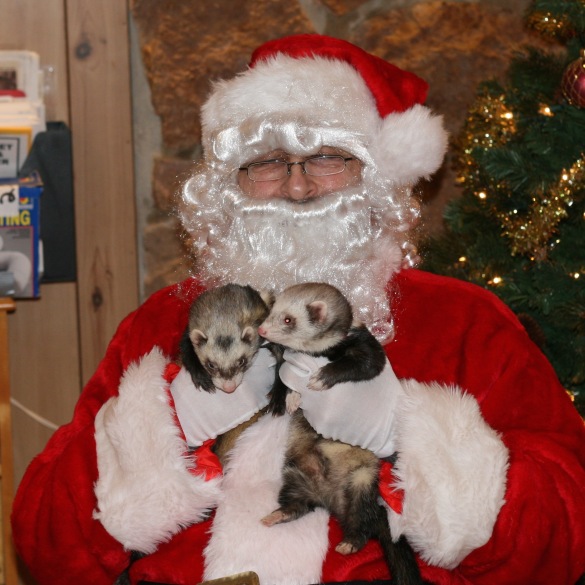 After picture taking, we all enjoy the delicious spread of pot luck finger foods and sweets that members brought. The hot apple cider provided by Deb is always the first thing to go! Bridget always spoils us with an assortment of homemade finger foods and homemade pickles!

Once our tummies are full, it’s time for the gift exchange. Everyone that wants to participate brings a $10.00 gender neutral wrapped gift.
We have had to limit the Christmas gift steal to “once” only as that bottle of Ferretone can change hands multiple times and cause some teeth gnashing! This year the candles, ferret paws blanket, ferret bed passed hands as did the Ferretone, the bottle of wine and candles, cookies and treats.

Our president Danial choosing a gift from under the tree

Once  the gift exchange was done; we had a very special visitor.
Ferret Santa aka Newton pulling his specialized cart arrived bearing a sack full of treats for all the ferrets in attendance. I’m not sure but I think Santa Newton was strutting his stuff for all the girl ferrets and I think I saw a wink or two exchanged! Much thanks to Fred for creating the whole ferret Santa event. Trouble is, now he has to do this every year! We all loved it so much.

Every year, we take a group Christmas picture. Some years back , folks picked out a paper sack that might contain a dress, pantyhose, a lumberjack shirt, a bra, you name it. You have to put the item on for the picture. The wardrobe of assorted clothes was starting to look like Value Village so we changed course a few years ago. Now, you match your number to the “silly hat”. Much easier to put on and I must say as I house all the MFA stuff in my spare bedroom, it is much easier on me too!

The party wound down at this point. Those of us that hadn’t left early due to other commitments were spoiled with a very special movie. Sharon purchased Santa’s Little Ferrets DVD. There are 3 short stories on the DVD. This movie with ferrets is professionally done. The outtakes after each set were hilarious! Trust ferrets to bring their own version of how things should be done. Sharon has left her DVD with the shelter and we will host another viewing at our upcoming annual Valentine’s Party!

Kathy and Bridget each won the raffle of a beautiful split hammock, Christmas red with glow in the dark eyes. Fred S. made these hammocks and donated them to raise money for the shelter. The ferrets get  to watch for Santa on Christmas Eve. 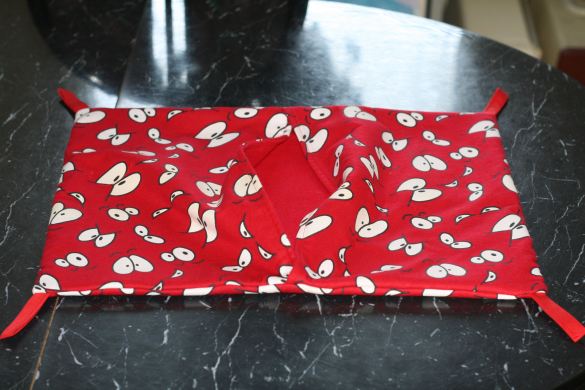 Glow in the dark eyeball hammock sewn and donated by Fred S.

The draw for the StryxNB basket was won by  Chantal L.

Please check out all the pictures from the party. Go to Manitobaferrets.ca and click on the flckr icon.