The Sponsorship program allows you to support one or more permanent shelter ferrets.  This is the ideal solution for a ferret lover who  lives in pet free housing.  This also allows a current or former ferret owner who does not have the additional room or all the financial resources to spoil a ferret in the shelter.

How the Sponsorship program works:

The sponsorship time frames are: three months, six months and one year. The fees can be paid through E-Transfer orPay Pal.  The Manitoba Ferret Association will provide a 5 X 7 color picture and biography with every sponsorship commitment of six months or longer. Play dates  with your sponsored ferret can be arranged with the shelter Mom.

If you are interested in Sponsoring the form needed is;

Thank you Monica for providing those tasty treats for Bandit! 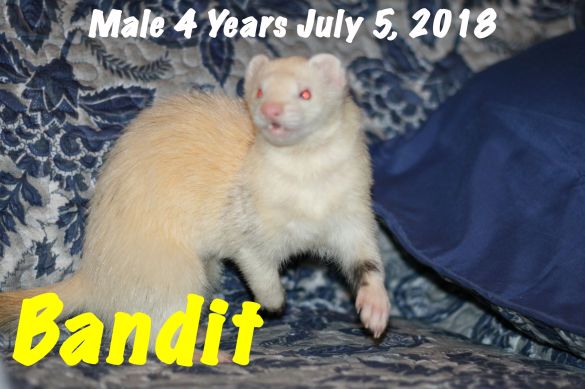 Bandit is a handsome 5 years old (as of March/19) old Silver lad. He is high energy; having only one speed; fast. He lives to do his weasel war dancing. Bandit has wonderful manners. Bandit loves to play chase! When his sponsor Mom comes over to visit they run circles around my place until they are both pooped right out!

LOOKING FOR A SPONSOR:

Boo came to us with behaviour issues.  When he was surrendered Boo was very stressed. He hated the sound of a woman’s voice. For the first nine months or so Boo  would leap out of his cage when the door was opened to try and bite the shelter mom.  He learned to trust again using his addiction to Ferretone. Every single time he was approached he was rewarded with a few licks of Ferretone.  I am happy to report that he now allows me to remove him from his cage, pet him for a few minutes before setting him down on the floor. Ferretone awaits on the floor.  Because of his issues, it would not be in his best interest to go into yet another home. A $15.00  sponsorship gift card  from a pet store in order for us to purchase a bottle of Ferretone every second or third month would be wonderful.

Slinky was rescued from a very bad situation.  Sadly her partner passed away within the first week at the shelter. Slinky moved in with Lovey, Jackie-O, Shrimp and Spud. She is spunky for a 5 year old and has settled in nicely. She is happy. She loves her Ferretone. A $10.00 a month sponsorship would allow her to enjoy her Ferretone. 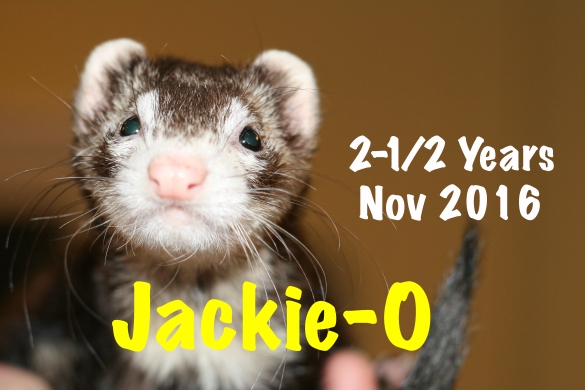 Jackie is a gorgeous dark sable with the sweetest temperament.  We had her up for adoption but her age seemed to go against her.  Three years old is not old!  This ferret lives up to her celebrity namesake Jackie-O. Jackie has moved from the adoption program as she has bonded with Shrimp and it would be cruel to take her from her friends. A $10.00 a month sponsorship will ensure that Jackie has her daily treats. 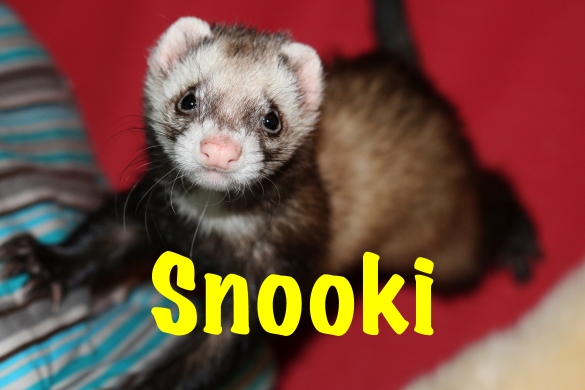 Snooki is a sweet middle-aged lady who came in with a younger male named Cheech (deceased 2020).  The two of them are best friends. Snooki has early adrenal and has a Desloran implant. Even with this implant, she continues to loose fur on her tail. Without the Desloran, Snooki would be naked as can be! Snooki and Cheech moved into the permanent furry cage when it became obvious that Snooki was not adoptable. We wanted Cheech to make other friends so that he wouldn’t be too lonely when Snooki crossed the Rainbow Bridge. For now, Snooki is doing well.  A $10.00 a month sponsorship would allow Snooki to enjoy her Ferretone.

Our Shelby! What can we say about this handsome fella.  Shelby was surrendered by a pet store because of his incorrigible biting habit. Shelby also has one deformed ear which gives him a sweet lopsided look.  Well we soon learned that Shelby is a special needs boy.  When you take him out of the cage and remind him No Bite; he will retain and remember for awhile and then ooops, he forgets that he was taught No Bite. His pure joy at running and bouncing and playing with the other furries makes you forget the bleeding tooth marks in your hand or forearm. So, with Shelby; we know that he simply can’t help himself as he doesn’t remember. We love him anyways! Shelby is a permanent furry because of this deficit.  A $10.00 a month sponsorship will keep Shelby well supplied with Ferretone and treats.

Buddy is a permanent furry.  He went blind overnight about a month after his surrender. Buddy and Beau both came in during the same month and are around the same age. We are concerned that this is a genetic flaw and are wondering how many of the “litter” have gone blind.  We really hope those owners have chosen to keep their blind ferrets.  Buddy was nippy but it was understandable. If you say his name and touch softly he will not bite you. Startle him and he will draw blood.  Buddy is a happy boy living with the other furries in the cage.  A $10.00 sponsorship will ensure that Buddy has his Ferretone and treats daily.

Lulu is a pretty sable girl with no tail; and we mean no tail. Unfortunately, the tail was removed right at the base of her bum.  This has left her with a hyper sensitive butt.  Touch it wrong and she will “hurt” you back with a good bite.  It took her a long time to adjust in the permanent cage as the other ferrets shunned her for being different.  Lulu would lash out if any of the other ferrets got too aggressive with the hello butt sniff.  Lulu has been with us so long that she was moved from the foster program and it would be cruel to make anymore changes in her life. A $10.00 a month sponsorship will ensure that Lulu has her daily Ferretone fix. 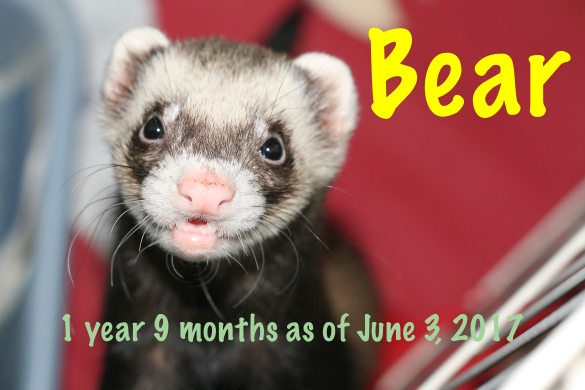 Bear is a handsome sable boy with a slightly deformed mouth.  It’s so cute that he always looks like he is saying OH!  The shelter and our vet decided that breaking his jaw and resetting it would be cruel. Bear has no problem eating the smaller round kibble and GO Chicken is perfect for him.  Bear and his brother Joe were available for a long time under the Fostering program.  Bear and Joe have moved to the sponsorship program because it would be cruel to force them to adjust to yet another new home. Bear is very bonded with the shelter mom as she spent so much time fussing over him and making sure he could eat.

Joe was surrendered with Bear (see above). These two boys are like an old married couple. They may fight once and awhile but you will find them sleeping curled up hugging each other.  We had several inquiries to adopt just Joe. Our mandate is to keep bonded pairs or groups together. No one wanted to take one Bear with his mouth issue. Bear and Joe have moved to the permanent furry cage.  They have made friends with everyone and love love love to run down the stairs to play in the ferret playroom. A $10.00 a month sponsorship will ensure that Bear and Joe have the Ferretone that they love!

Woozle is a very special boy. He was sparred from being euthanized as a 5 week old kit. The breeder offered him to us because of his special needs. You see, Woozle’s insides are not quite where they should be. His “belly button” is lower down.  His one testicle was tucked up high almost in the stomach area. Our vet successfully re-neutered him and he is doing fine.  We do not know what other medical challenges Woozle will face or how long he will be with us.  We have promised that he will have the best life we can give him. When you pick Woozle up, his”man part” pops out; he can’t help that.  This puts him at risk of infection or injury when he climbs as well. We must check each day to make sure everything is ok. Meanwhile he  has made friends with Turbo and several other furries in the permanent furry cage.  A $10.00 a month sponsorship will ensure that Woozle has Ferretone and access to medical help. 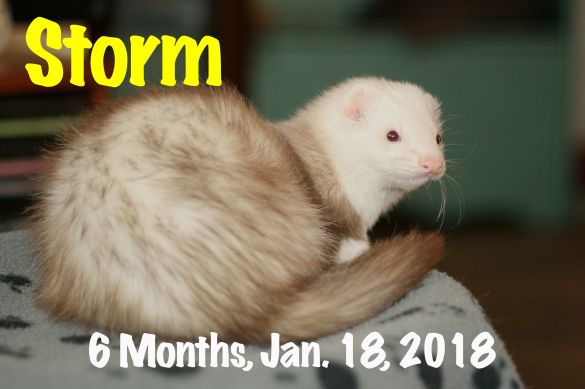 Storm came to us thin as a rail. Turns out he disliked the Marshalls Ferret Food and had stopped eating for his owner.  Because he self starved himself, he now has tummy issues and is a permanent resident. A $10.00 a month sponsorship would allow him to enjoy his Ferretone. 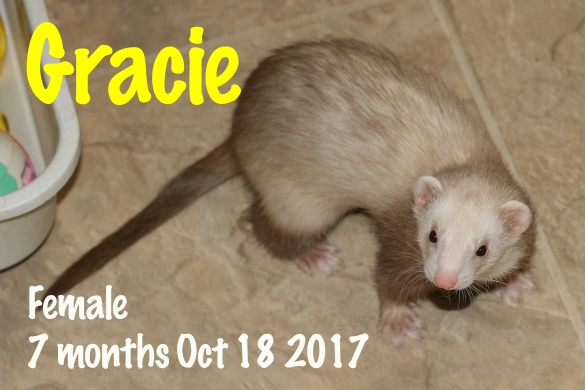 Gracie came to us as a severe biter.  It took her over a year to learn to trust hands. What we have discovered is she trust me, but does not like strangers.  Sadly, as she is unpredictable, she will be staying as a permanent resident. A $10.00 a month sponsorship would allow her to enjoy her Ferretone. 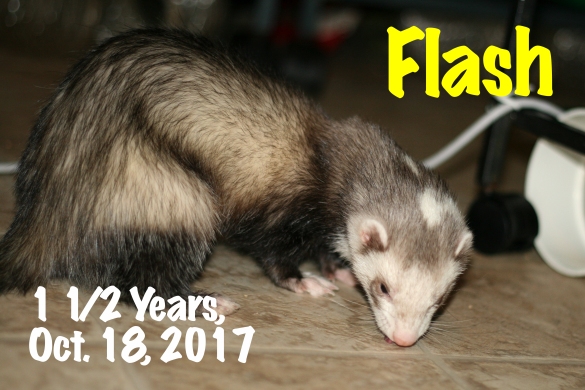 Flash was surrendered to us when his cage mate was adopted and he was left behind. He had a breakdown and it took him a long time to bond with his new cage mates and human. We don’t think he could handle another change in his life and he is happy with the other cage mates which are also permanent residents. He is a bad foot biter. A $10.00 a month sponsorship would allow him to enjoy his Ferretone.

Buddy lost his partner Lucy but still had his other buddy Opie.  When Opie passed away,  Buddy moved into the senior cage and now has lots of company. A $10.00 a month sponsorship would allow him to enjoy his Ferretone. 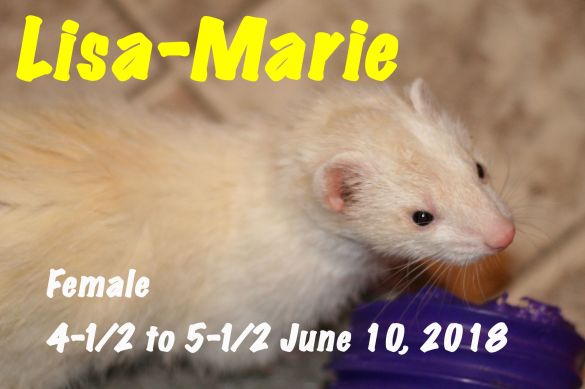 Lesa-Marie’s  first mom passed away suddenly and she was placed with our satellite shelter mom. Sadly her second mom also passed away and she came into the main shelter.  A $10.00 a month sponsorship would allow her to enjoy her Ferretone.