This is a story of a bonded pair, the heartache and the second chance at love.  Jack and Jill were surrendered to the shelter.  It was obvious they adored each other.  We do not split bonded pairs and we make that quite clear during adoptions.

In time, an adoption was processed for Jack and Jill.  Within the first month there were rumblings of discontent.  They scratched too much. They didn’t play together. They were sick.  The ferrets were re-checked by our vet and he pronounced them a healthy pair of furries. The vet’s expertise was questioned. Things deteriorated from there.  I got a call that Jill was dying; there was something wrong with her.  The new owner was only willing to return Jill, insisting on keeping Jack.

Jill was picked up and she did not look sick or “dying”. She had blown all her guard hairs; but she had a good weight to her.  We took Jill to a different vet clinic in the morning and got her accessed . Once again she was given a clean bill of health.

My job now was to make sure she didn’t die of a broken heart after loosing Jack.  I worried about Jack but I had no control over that.  Jill refused to make friends with any of the other furries in the shelter.  She lost weight, she pined for Jack.  Slowly she put the weight back on but her spirit seemed broken.

Bridget, my satellite shelter mom inquired about bringing her there to help her old timer China Girl who had recently lost her cage mate. It was worth a try.  It took about a month for the girls to get along.  They share a cage but don’t sleep in the same hammock.  When they are out playing, they follow each other around and play. They have bonded.  Bridget tells me they don’t let each other out of sight.  I am so happy Jill has found furry love again.

Jill whom Bridget renamed Jube Jube adores Bridget.  Jube Jube has fallen hard for Bridget; she has found a human to love and trust again. When she climbs up on the couch for her snuggle time with Mommy; whoa is you if you try to touch Bridget. Jube Jube is not sharing her cuddle time with China Girl or Bridget’s spouse Danny. 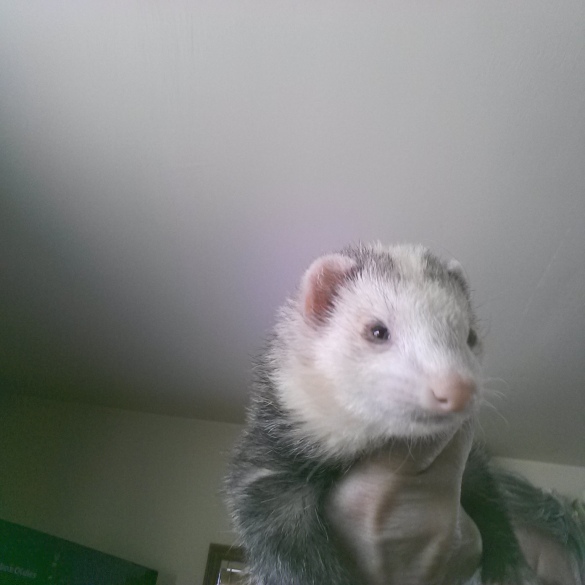