As a shelter mom, I hope that every adoption is perfect and that the ferret(s) are going into their forever home.

In reality, life can throw us curve balls and the adoption breaks down.  The MFA has a clause in the adoption form which states in part that the ferret(s) must be returned to the shelter if the person can no longer look after them. I check out Kijiji regularly for ferrets up for sale, I am checking to see if one of my adopted ferrets has shown up on Kijiji.

Approximately 2 years ago, two very special girls that I had adopted to a good home showed up on Kijiji.

Numerous attempts were made to the ferret owner to get him to comply with the legal adoption form he had signed.  I was finally told the ferrets were going to a family member. Even my offer of a full refund fell on deaf ears. I was heartbroken and dearly hoped that they were in fact going to a family member and would be well cared for.  I confess that it ate at me and I kept my eye open for them on Kijiji but I am not on the site every day.

About two weeks ago I was on Kijiji and I noticed two ferrets for sale. The ad caught my attention because these two girls were described as spayed but not descented! The pictures took my breath away.  They were my two special girls and they were back on Kijiji again! My heart broke to think how many times they had been passed from hand to hand.

To make a long story short, I contacted the ad and through e-mails I was able to prove that these special girls had come from my shelter and that I in fact had their mothers, these two girls were replicas of their mothers.  The couple had acquired them off of Kijiji but the girls had not settled in as they had hoped and they were looking to re-home them. This wonderful couple was gracious enough to give them back to me.  I made a donation in their name and purchased them to show that I would never re-home them.  These special girls were going to live out their lives with me and their mothers. This couple was rewarded with  two year free membership for their kindness, for being true ferret people and saying what was best for the girls was the most important thing!

There seemed to be some recognition when the mothers and daughters met.  However, one of the daughter’s Rico was not in good health. I suspected Cardiomyopathy and started her on Lasix.  The other ferret Yippy was a plump girl, bright eyes, good coat but she would come out and do the “flat” ferret.  Clearly all this re-homing over the last month had taken it’s toll on her.

Today Yippy is back to being a normal ferret in that she will run through the tubes and hide the stuffies.  She will not go far from Rico and when Rico puts herself to bed, Yippy will drop everything to go and cuddle up next to her.  Because of Rico’s heart issue I could not follow through with my plan to have the mothers and daughters in the same cage.  That is my long range plan once I have Rico stable.  I do let them all out together for short periods of time to interact.  I am very worried that should I loose Rico to heart failure, Yippy may follow with a broken heart! I really want her to have a strong connection with her Mom and Aunty.

As of today Rico is holding her own.  The fluid is gone from her abdomen but she is not eating much.  I have started her on duck soup and that is not going well.  I have to balance forcing the duck soup with her heart issue!  Fortunately Rico loves Ferretvite and I am hoping the Ferretvite will stimulate her appetite.  Rico is really not doing well so folks, please send your prayers her way.

Sadly, my Rico lost her battle before I could finish this post, rest in peace sweet baby. I got to hold you and love you – you came home. 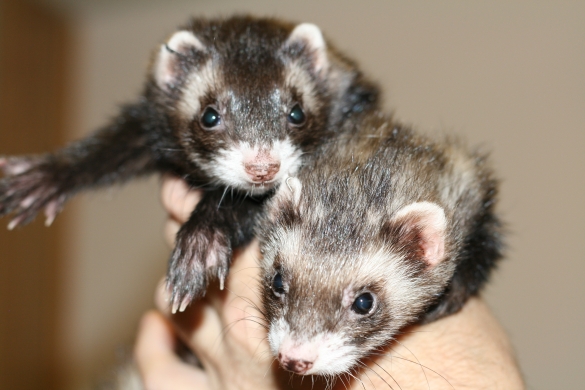