I have my grandson Holden every other Sunday for 6 hours, which is always cherished time, I admit to spoiling him (a bit)!

As last time I had to cancel it had been a whole month since his last visit, Holden bounced into the house, gave me a hug and went straight to the kitchen. As I get him from 11:30 to 6:00 pm, he always arrives hungry.

In that month between his last; visit oops something happened in Grandma’s kitchen, much to my grandson’s surprise he couldn’t find any fruit, “what’s all this stuff Grandma?” As I will never pass up to a chance to tease I promptly replied that I thought he might like to try something different for a snack.

Holden gave a very puzzled and worried look because in front him lay an assortment of Bandits Ferret Treats that had recently taken over my fruit bowl. I did have fruit in the bowl, on the bottom and at the back – 2 oranges, 2 bananas and one wrinkly apple, but all Holden saw were bags of different flavored treats. I offered him; Bacon, Chicken, Raisin or Banana flavor – but my silly grin gave it away and he knew I was teasing him (we shared the bananas). 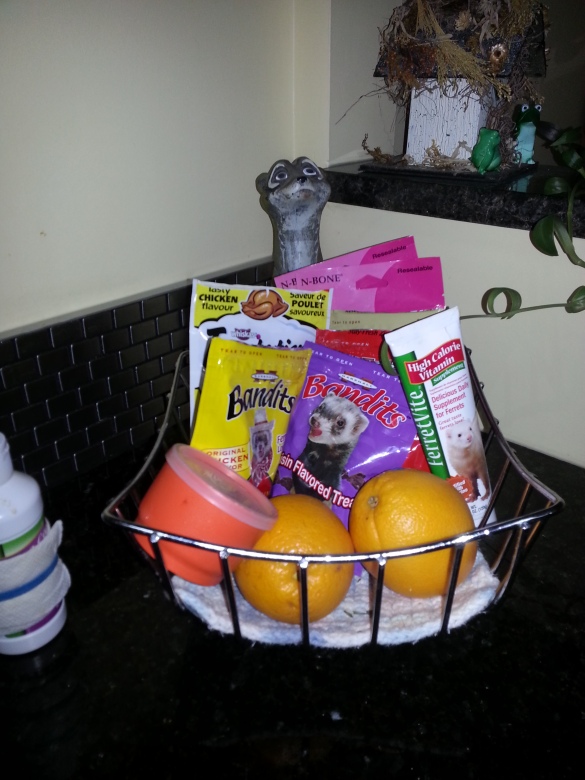 Now I do have to clear up why I have ferret treats in my fruit bowl; you see I also have a whippet named Riley, this little guy will eat anything on the counter his paw can drag off. The Bandits treats are yummy, but the resulting bout of diarehea is something I get to clean up, so all the treats have to be as far back on the counter as possible to help keep them out of reach. Before you suggest the ferret cupboard (yes they have a whole cupboard devoted to all their bucket of food and grooming supplies) Riley can easily open that cupboard (by the way, his other name is “No No Bad Dog”). I am sure my ferrets in their cages were holding their collective breaths when they heard me offering up their prized treats!

At the main shelter all the ferrets are offered Ferretone, Bandits treats, the occasional bite of cooked chicken or beef and the odd container of cat treats (such as pounce chicken) but the furries seem to prefer the Bandits treats. Once a week, usually on the weekend, they all get “duck soup”. I give them the duck soup so that when they are sick I will have a high protein, easy to swallow food to help them pull through.

I never give my ferrets anything with sugar, I have had to nurse far too many ferrets with Insulinoma to knowingly put them at risk. Many of the shelter ferrets come in with a craving for sweets and sooner or later they will develop a tumor on their pancreas (Insulinoma). Because I can, in my house the fruit bowl will always have Banditt treats, my family have already figured out I’m crazy – crazy for ferrets!